What’s the Difference Between Democrats and Communists? 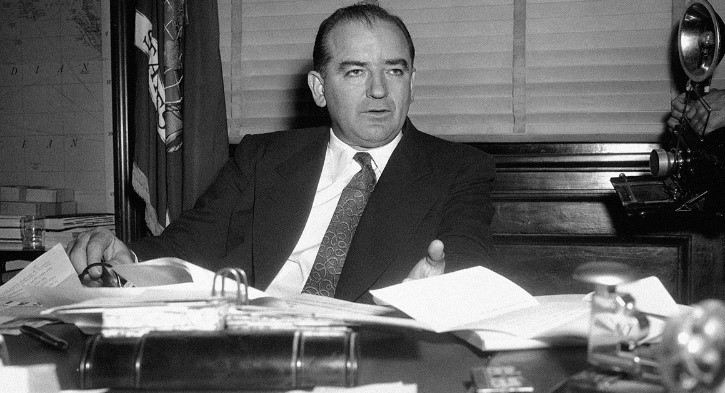 What’s the Difference Between Democrats and Communists?

I wasn’t even born when McCarthy was going after communists in our government and political class. I wasn’t there, so I have no idea what really happened. But history says he was wrong. Okay, let’s go by that assessment.

First, it’s important to examine the economic news out this week. On Thursday, we found out US jobless claims fell to 49 year lows, below all forecasts. The last time this few Americans were out of work was 1969- the year man first landed on the moon.

Then on Friday, the Labor Dept. reported the US economy added 196,000 jobs in March, far exceeding expectations. The Trump economy is booming. As usual, capitalism is a roaring success.

Here’s are important questions: Who could possibly be angry at these results? Who could deny the economy is booming? Who would desperately demand a change?

Today’s Democrat Party hates these results. They desperately demand a dramatic change in course. Today’s Democrat Party is turning towards the darkest political philosophy in history. Remember, the problem isn’t just the misery and unimaginable poverty caused by socialism and communism. During the 20th century about 100 million souls were murdered in the name of communism.

Even liberal publication “The Atlantic” ran a story days ago titled, “The Democratic Party is Radicalizing.” They listed what today’s leading Democrats stand for…

*The Green New Deal that would (in their words) “completely transform the American economy, put the federal government in control over large sectors, retrofit every building in America…and constitute by far the greatest centralization of power in American history.”

*Abolish ICE, protect sanctuary cities and take down all existing walls on the Southern border.

*Allow abortions up until the baby’s moment of birth, or even after birth.

*Opposition and in many cases, outright hatred towards Israel, America’s longtime best friend.

There is no question what Democrats stand for. This is all public news. The only question is, what separates this “wish list” from the agenda of the Communist Party of America?

But if you require more proof: Eight prominent Democrat presidential candidates gathered in DC last week for the “We the People Conference.” The conference began with the organizer invoking the words of radical, communist Black Panther Joanne Chesimard (now known as Assata Shakur), a convicted cop killer and member of the FBI’s “most wanted fugitive terrorist list.”

The event organizer called this terrorist cop killer a “leader.” Then he asked the audience to stand up and repeat her words. They all stood and celebrated with glee.

Shakur’s words were taken from the final sentences of the Communist Manifesto by Karl Marx. Think about that- Eight prominent Democrat presidential contenders were present in the room while attendees recited and celebrated the words of communist founder Karl Marx and a communist cop killer.

Keep in mind…these weirdos, freaks and flakes are the Democrats who want to become President of the United States.

Please remember that when you vote in 2020. It’s either Trump’s America, or it’s a dark, radical, socialist, Marxist, communist America that celebrates cop killers. Then, vote like your country, your life and your children’s future depends on it.