Carl Rove Is What’s Wrong with the Republican Party 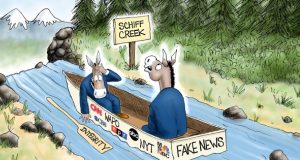 Carl Rove Is What’s Wrong with the Republican Party

On March, 27, 2019, in the Wall Street Journal, Carl Rove expressed the notion that President Trump should move on from Mueller and not dwell on the criminal and unconstitutional things that he, and America, was forced to endure these last two years, with the false collusion investigation, the obstruction of justice charges, the name-calling and the daily lies that the lying press, and fools like Adam Schiff and Eric Swalwell, dumped on him. Mr. Rove suggests, now that the Mueller investigation is finished and no collusion was found, that President Trump just turn the other cheek and “move on” with his work and forget what the likes of Brenner, Clapper, McCabe, Comey, Strzok, Page, all of whom were answerable to Barack Obama during his last year in office, and all of whom plotted, as members of the Obama administration, to keep the Trump campaign from winning the 2016 election and assure a Hillary win. The reason Mr. Rove thinks that the president should simply forgive and forget is that he believes that going after his political rivals would turn off the non-aligned, swing voters in the 2020 election.

This is proof that Mr. Rove, an old Republican hand, is one of the reasons for the wishy-washy, go-along-to-get-along, losing Republican party has allowed the leftists to take control of politics for the last 40 years. Just show your enemies that you are not as bad as the Democrats and CNN say you are, and everything will be fine, the losing Republicans say. But Democrats play for keeps, while Republicans just play for the sake of the political game, and that’s why Republicans always lose. President Trump is showing Republicans a new way to play the game of politics: play hard and WIN once in a while, instead of losing all the time.

We know that the total weight of the FBI, the FISA court and the Department of Justice was brought to bear on the Trump campaign, complete with spying and fabricated documents intended to either keep Trump from winning or assure his impeachment if he were to win, and this third-world, corrupt activity must be met with stern determination if it’s ever to be halted . President Trump has survived hell these last two years, and many people close to him have had their lives destroyed, and the lame result to the Mueller investigation simply stating that they found no proof of collusion, does not settle the issue.

It’s a cinch that the Leftist press will not make any remarks critical of the Democrat party when it’s in power using the full force of the federal government to keep their rival party from gaining the White House. With no recognition at all that President Trump had won the two-year battle with the fake investigation, networks like CNN immediately pivoted and began re-issuing the same old comments about the illegality of the Trump administration all over again, the day after the Mueller verdict came out, and the Democrat party is still intent on investigating the Trump campaign in an

It’s one thing for the lying press to tell themselves lies about the Trump administration, but it’s unacceptable to allow them to keep telling American citizens the same old lies they told prior to the end of the investigation, just because they hate Donald Trump.

President Trump, as Commander in Chief and the nation’s Chief Executive Officer, has a responsibility to root out criminal activity, and if any criminal activity was done by the Obama administration, the FBI or the DOJ, then that’s where the president’s Attorney General must look, and put people in jail if they are found guilty of wrongdoing. This may be the last time we have a truly honest president whose expressed intention was to drain the Washington swamp, and we have only two years left until we may get a president who will bury all of the wrong-doing we’ve seen mounted against Donald Trump. President Trump is the only one who has the principles to go after the bad guys, while Carl Rove tries to call him off. And as far as the swing voters go, I believe that the president can gain many voters to his side when the DOJ produces evidence against those who plotted against Trump and tried to deny those of us who voted for him, the true result of our vote.

The corrupt events that occurred during the Obama administration that led to the Mueller investigation, along with the more current abandoning of charges against Jussie Smollett for his hate-crime against all who voted for Donald Trump, must be investigated to the fullest extent possible and each perpetrator punished fully if found guilty, in an attempt to eliminate the Democrat tendency toward corrupting everything they touch. Maybe if we put enough Democrat/progressive fools in jail they’ll learn their lesson and stop undermining this nation, its laws and its constitution.

The corruption of the leftist media and their allies in the Democrat party, know no bounds.