New Ear To The Ground Poll: Wall Is Make Or Break For Trump And GOP 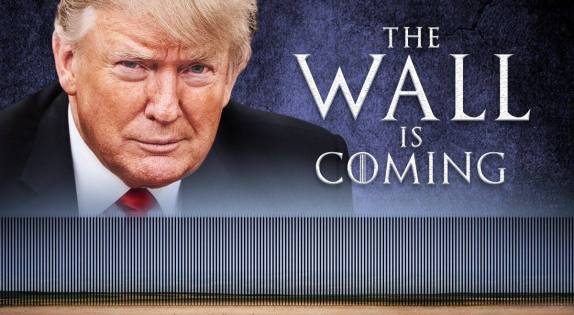 New Ear To The Ground Poll: Wall Is Make Or Break For Trump And GOP

Most Trump voters still support the President for the time-being, even if they view the outcome of the Shutdown Showdown as his loss, according to a survey by Ear to the Ground, a project by The Frontier Lab.  The “Grassroots Pulse” survey of 2,700 primary and general election Trump voters was conducted January 25-27 in collaboration with Citizens for Self-Governance.

“The grassroots activists represented in this survey were fundamental to the President’s election. While they are still with him today, it appears the President better build the wall or his support will significantly suffer. Politicians have a habit of not listening.  Hopefully the President will keep his ear to the ground,” said Mark Meckler, president of Citizens for Self-Governance.

“Trump primary voters may warrant a second look from Republican Party insiders as the results indicate they are more attached to the Republican brand than others in the grassroots,” said Anne Sorock, president of The Frontier Lab.

Poll Shows Voters Think Trump Lost Showdown, and Could Lose the Base

The poll showed Trump voters are divided as to who won the shutdown showdown, but only 43 percent said President Trump was the victor.

Sixty percent of Trump voters approved of ending the shutdown. However, the fissure between primary and general election voters for Trump appears to have widened, with primary supporters more likely to say they supported him ending the shutdown (63 percent) vs. just half of the non-Trump Republican primary voters (50 percent). Those who voted for Ted Cruz in the primary were even lower in their support – just 46 percent said they supported ending the stalemate.

Trump voters gave him a 6.78 level of support on January 1, 6.71 today – but would score him 3.82 if he fails to secure border security funds, a drop of 43 percent. Female Trump primary voters would score him 3.97 in the future.

Donald Trump primary voters say their support for the President had waned slightly between January 1, 2019, to today, from a weighted average of 6.84 to 6.77 (on a seven-point scale), but said that if he fails to secure additional border security funds, that support would also drop 43 percent to a weighted average of 3.88.

“In our previous research, we identified the strength of connection early-adopter Trump female voters have to the president and we’re finding that women continue to rank his performance higher than males who also voted for him in the primary,” added Anne Sorock.

Trump Women and the GOP

In another finding, women who voted for Trump in the primary indicated they are more likely to definitely vote Republican in the future and to identify as Republicans.  Based on the survey:

“Most striking is that women who voted for Trump generally support the party more than men who voted for him in the primary and other (non-Trump) Republican primary voters,” stated Sorock.  “This may be an area for Republican leaders to explore as they express concern about suburban women disaffiliating from the Republican label.”

The survey of women voters found:

Effect of the Shutdown on Opinions of Federal Government

The shutdown showdown did influence perceptions of whether the federal government is important to the day-to-day lives of Republicans surveyed:

70 percent of primary Trump voters said they felt the federal government was less important as a result of witnessing the longest government shutdown;

17 percent said they didn’t know, and;

The Transportation Security Administration may have also lost some of its appeal:

While Trump presidential voters had consistently different levels of opinion depending on whether they had voted for Trump or a different candidate in the primaries, they were united in failing to approve of the arrest of Roger Stone: 9 out of 10 did not support his arrest earlier in the week.

About the Ear to the Ground Listening Project

The Ear to the Ground Listening Project is a collaboration between individuals in grassroots and public policy arenas seeking to understand and reflect the voice of the American people through the tools of market research. Learn more at www.eartotheground.us.